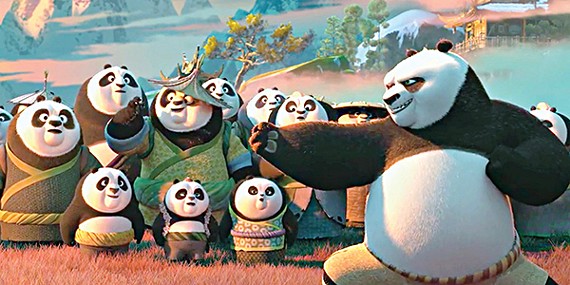 Between one parent and one child,
Their love is uncomplicated,
Even if they’re not related
Or may feel somehow exiled.

Will it change, their love compiled,
If a parent is located
From which they were separated
And the two are reconciled?

Some may fear they’ll be reviled
At reunions long-awaited,
Yet how can love be ever faded
Between a parent and their child?
________________

It may have seemed that DreamWorks was just planning to milk its past success with minimum effort when it released a third Kung Fu Panda in the usually lackluster month of January last year. However, Kung Fu Panda 3 managed to exceed expectations and end the franchise on a surprisingly solid note, building on its prequels with a satisfying conclusion.

After the final scene of Kung Fu Panda 2, where Po’s real not-dead father Li Shang (Bryan Cranston) realizes his son is alive, we get to see father and son reunite early on, only to be threatened by a new adversary named Kai (J.K. Simmons), a yak from the Spirit World who drains others’ chi energy. While Kai builds an army by turning kung fu masters into jade zombies (yes, jombies), Po (Jack Black) follows his father to his home in a distant village of pandas, where Po hopes to train but ends up enjoying the life among his own kind that he never knew.

Kung Fu Panda 3 continues the strengths and weaknesses of its predecessors, including some stellar fight choreography and animation, as well as a lack of character development for Poe’s comrades, the Furious Five, except for Tigress (Angelina Jolie). Where it excels in the character department is Po and his two fathers, adoptive goose father Mr. Ping (James Hong) and his biological father Li. I love how Mr. Ping has grown from an eyebrow-raising gag in the first film to a real source of heart for these movies. Here, he finds himself jealous of Po’s excitement at finding his father and wrestles with how to react to this new monopolizer of Po’s attention. Meanwhile, Li may seem selfish or unwise at times, but it’s easy to sympathize with both fathers. In addition, the fact that Li seeks out Po after realizing he’s alive makes his absence a whole lot more understandable than, say, the willing separation of Hiccup’s mom in How to Train Your Dragon 2.

Kung Fu Panda 3 does a lot to bring the franchise full circle, particularly in the return of the deceased Master Oogway (Randall Duk Kim). True, it sidelines formerly major characters like Shifu (Dustin Hoffman) and bears similarities to the first film, but Po’s family dynamic and the Spirit World villain help it stand apart. The village full of Po’s fellow lazy pandas was also cute and endearing for the most part, where I expected it to be lame and silly. Aside from the action sequences, I especially admired one underplayed sacrifice that was easily Poe’s most heroic moment of the series.

All in all, Kung Fu Panda 3 is a worthy and funny finale for a series I didn’t expect to like when the first film was released back in 2008. DreamWorks has maintained its quality in both animation and story, creating a trilogy where it’s hard to say which of the three is the best, though I’m partial to the second movie. Why it was released in January, I don’t know, but Kung Fu Panda 3 is one of DreamWorks Animation’s stronger sequels.

Best line: (Shifu) “If you only do what you can do, you’ll never be better than what you are.”

Rank: List-Worthy (joining the other two)