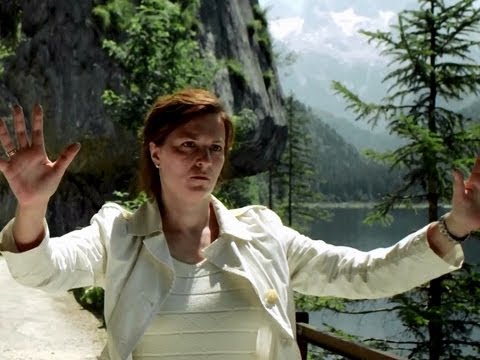 (Today’s NaPoWriMo prompt was for a poem centered on some aspect of the natural world, so I picked a film with beautiful scenery.)

A stone in the mountains was where I would sit
When my mind became tenuous, troubled, and torn,
And there I would gaze at the dips and ascents
Of a green countryside so serene and immense
That I doubt it had changed since the planet was born.

The sun had God’s view where the clouds would allow,
And outcrops of trees bent to frame the landscape.
A forested quilt full of patches and glades
Extended below me in emerald shades;
A mist hovered o’er with no hope of escape.

My limited world, feeling smaller each day,
In view of this limitless vista below,
Was somehow bestowed with more peace and more hope
That this life on this stone on this sumptuous slope
Was not so confined and had room still to grow.
_________________

MPAA rating: Not Rated (PG, nothing much objectionable, except some animal deaths)

When it comes to isolationist cinema like Cast Away or Moon, none are quite as simple and direct as The Wall, an Austrian-German film about a young woman whose visit to a mountain cabin becomes permanent when an invisible wall cuts her off from the outside world. The concept may be reminiscent of Stephen King’s Under the Dome, but it plays out like an extended episode of The Twilight Zone, with the nameless woman (Martina Gedeck) forced to survive with this one simple, unavoidable wrench thrown into the works of her life.

It’s also a sublimely quiet film with a bare minimum of spoken dialogue, instead relying on Gedeck’s voiceover recounting her experience via journal entries, like Robinson Crusoe detailing his survival methods. Yet, beyond the activity, there’s a substantial focus on the woman’s feelings, doubts, fears, and inner reflections, from her relationships with her animal companions to her nightmares of her world continuing to shrink and deep ruminations of life and death.

Because it’s such a philosophical and contemplative film, it’s not something to watch if you’re sleepy and will probably bore you even if you’re not. Plus, it ends in Twilight Zone fashion with some raw emotion and little closure. Yet, set amidst the classical violin score and some absolutely gorgeous German countryside, there’s a subdued tranquility to the struggles of a tortured soul struggling in silence. It’s sad and lovely and probably something I’d only watch again if I couldn’t sleep.

Best line: (the woman) “There is no rational emotion as love. Love makes the life of the lovers and the beloved ones more bearable. We have to just recognize in time that this was our only option. Our only hope for a better life.”