Though shots ring out both far and near,
And men engage in hate and fear,
I will not.
I’ll do my duty, honorbound,
But for my faith, I’ll stand my ground,
As I ought.

Though every man insist that I
Should join their wish that others die,
I cannot.
And when war’s done, my heart’s belief
Will hold more worth and bear less grief
Than they thought.
___________________

Perhaps appropriately considering its subject matter, Hacksaw Ridge caused me a bit of a crisis of conscience. I don’t typically watch extremely violent movies, which is why I’ve avoided films like Braveheart and anything Tarantino, and I was very hesitant to see Hacksaw Ridge after hearing of the intensity of its battle sequences. My VC, who is of the same mind, urged me not to, but there were enough positive elements inherent in the story of conscientious objector and war hero Desmond Doss that I decided to risk it. That actually made Hacksaw Ridge the first R-rated film I’d seen in the theater, and by the end, I was glad I did.

Mel Gibson may have shot his reputation in the foot years ago, but his talent as a filmmaker is undeniable, and it’s surprising and inspiring that he’s been somewhat forgiven by Hollywood, based on the number of Oscar nominations and wins Hacksaw Ridge received. His latest film has a lot in common with The Passion of the Christ; both carry deep religious meaning for Christians especially and also indulge in some gut-wrenching bloodshed that mark them as clearly not for everyone. It took me a while to work up the nerve for Passion of the Christ, but now I watch it every Good Friday; Hacksaw Ridge, likewise, requires a strong stomach in parts, but the overall story makes it worth it.

Andrew Garfield hardly seemed like an obvious choice for the potential Oscar-magnet role of Doss, but he was a massive surprise; he’s no longer that second-rate Spider-Man. As Desmond, he’s folksy but determined, earnest but firm, kind but tenacious, a man who wants to help others at any cost to himself, in short a true hero. Other casting examples were also less-than-obvious choices, such as Vince Vaughn as Desmond’s drill sergeant with a deadpan sense of humor or Hugo Weaving as his war-haunted father. Everyone involved does a phenomenal job, particularly Weaving, and even if the collection of fellow soldiers Desmond meets in boot camp don’t all register at first viewing, the quality of the acting never lapses.

The film is basically broken into two parts: the first half sees Desmond enlist as a medic and deal with the consequences and persecution from his refusal to carry a gun, while the second focuses on the decisive battle at Hacksaw Ridge and proves this supposed coward as anything but. I’ve seen some reviews criticize the beginning as preachy and heavy-handed, but I feel that one’s opinion of Desmond and his father waxing eloquent about freedom of religion and the Constitution depends on how dearly one holds such conservative values. I found it refreshing for a mainstream film to extol the First Amendment and the right of someone to serve his country as his faith allows. Desmond may be a Seventh Day Adventist with views that not every Christian holds, but his right to uphold his own principles is the same. 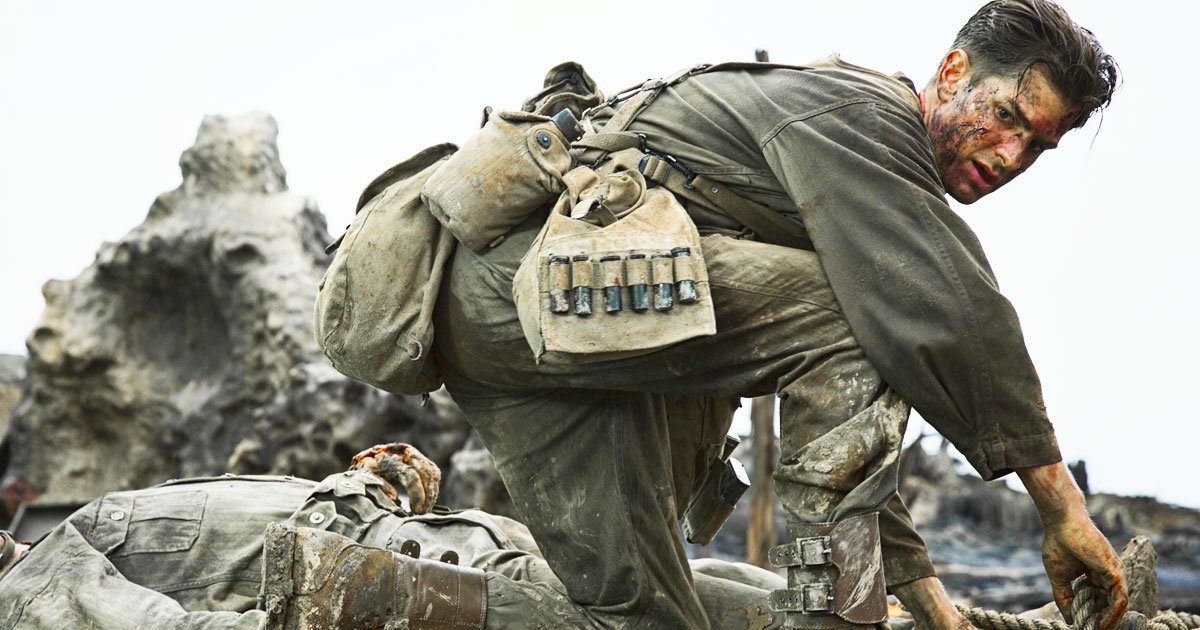 Even those rolling their eyes at the first half have praised the second for its realistic war scenes, and they are indeed intense and visceral. The explosions are constant, the body count is high, the headshots are many, and I may have spent most of those scenes with my eyes off to the side, watching in my peripheral vision. With superb editing, Gibson certainly nails the visualization of war as hell, but I don’t quite agree with those who say that it’s not gratuitous if it’s realistic; the gruesome double headshot that kicks off the carnage is a prime example. I still insist that films like Gettysburg and most of Glory are proof that war scenes don’t have to be gory to be effective, but the hell Desmond endures does make his courage in the face of it even more incredible. The violence may be an extreme, but at least here it serves as a counterpoint and contrast to the main character’s grace and perseverance, not unlike Passion of the Christ. I will say that, now that I’ve seen this, I do feel a bit less anxious about seeing Saving Private Ryan as a Blindspot pick later this year.

Though the worst moments of battle were extreme, it luckily wasn’t constant. It’s when the shooting stops that Desmond’s role as a medic and hero kicks in. As he recovers the wounded of Hacksaw Ridge and prays to save just “one more,” the tension never lets up, and Desmond demonstrates the valor and backbone his fellow soldiers assumed he lacked. I loved how the one time he does touch a gun, it’s for a wholly practical purpose in one of the most exciting scenes.

There’s little doubt in my mind that Hacksaw Ridge is one of the best war films I’ve seen, made even better by concluding with interviews with the real Desmond Doss. Some may consider it cheesy but appreciate the war scenes, while I tolerated the bloody battles and embraced everything else. Gibson seems to excel at making religious themes accessible, and what some call preachy, I call laudable. Even if some scenes are hard to watch, few films can match the selfless courage on display in Hacksaw Ridge.

Best line: (Desmond) “It isn’t right that other men should fight and die, that I would just be sitting at home safe. I need to serve. I got the energy and the passion to serve as a medic, right in the middle with the other guys. No less danger, just… while everybody else is taking life, I’m going to be saving it. With the world so set on tearing itself apart, it doesn’t seem like such a bad thing to me to wanna put a little bit of it back together.”