I saw a young boy among beggars,
A large metal spoon in his fist.
He’d found it somewhere
In a state of despair,
Too terribly lost to be missed.

I sipped at my soup in the window,
Entranced by his curious stare.
With a ravenous look,
Every mouthful I took
He mimicked and sipped at the air.

I could have just smiled and left then,
Averted my eyes toward the door,
But I gazed at this boy
With a spoon for a toy
As if he’d never used one before.

While others passed by the poor beggars,
I crossed the street, frenzied and thronged.
Soon at the boy’s side
At the turn of his tide,
I helped him find where he belonged.
__________________

So this is why one of the first things my parents taught me to memorize was our home address! Lion may have been overshadowed by the more prestigious Best Picture nominees, but it’s an outstanding film and one likely to leave viewers reaching for the tissues by the end. Directed by debuting director Garth Davis, it is based on the true-life story of Saroo Brierley, following him from a lost boy in India to his adoptive home in Australia and back.

Young Sunny Pawar portrays Saroo as a five-year-old, who resides in a small town in India, where his mother, sister, and elder brother Guddu (Abhishek Bharate) eke out a poor but happy life. When Guddu unwisely brings Saroo along for a job near a train station, Saroo accidentally ends up trapped on a train, hurtling away from home for miles before arriving at a foreign place where he can’t even speak the local dialect. It’s utterly upsetting for the boy and similarly disorienting for the audience as Saroo calls pitifully for help that never comes. From then on, his life becomes a series of rude awakenings; every time he falls asleep, he awakes to some new danger or peculiarity, and only the kindness of strangers leads him to a chance at happiness with the Brierleys (Nicole Kidman and David Wenham) in Australia.

Once Saroo grows up into Oscar nominee Dev Patel, the film loses some steam, focusing on his self-destructive relationship with his girlfriend (Rooney Mara) and his online pursuit of his original family. It’s hard to make a Google Earth search compelling, but the film does its best, and the end result of Saroo’s quest is undoubtedly worth it. As good as Patel is, the brightest point of the second half, aside from the ending, is Nicole Kidman as his adoptive mother Sue, the kind of patient and loving parent every lost child deserves. It’s understandable that Saroo initially feels guilty about searching for his first home, afraid to seem ungrateful for Sue’s affections, but their scenes together capture the sensitive and unconstrained bond between mother and son.

There’s more than just the acting to praise, though. For example, the score by Dustin O’Halloran and Hauschka is gorgeous and perfectly enhances the emotion of the film. The artistry also extends to the cinematography, which is lush and vivid, especially the overhead landscape shots that show off the natural beauty of both India and Australia. 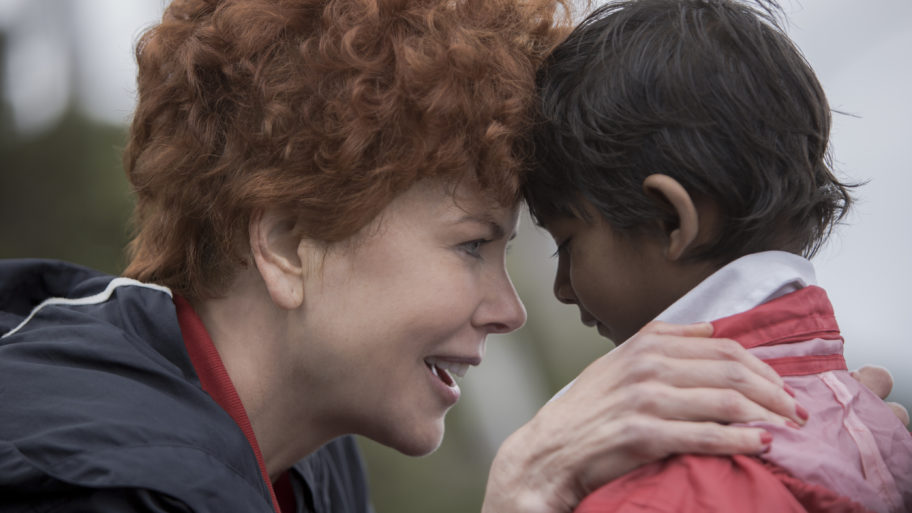 While I did get a bit misty-eyed, the end didn’t quite bring me to tears, though that’s more on me than the film since I heard a few sniffles in the theater. My VC hasn’t seen it yet, but I suspect she’ll have a stronger reaction than I, especially since she always bawls at the end of tearjerkers like The Color Purple. Perhaps one reason I particularly enjoyed Lion is that it fits into my beloved, self-titled genre of the “Meet-‘Em-and-Move-On movie,” which follows a character through various acquaintances and ends with a reunion. (For further clarification, I compiled a list of my favorites.) It’s this kind of film that packs the strongest emotional punch for me, and it’s been a while since such a film was made to Oscar caliber. The source of its title may not be apparent at first, but Lion is a tribute to the transformative power of adoption and a poignant journey of a film not to be overlooked.

Best line: (Sue Brierley, to Saroo) “Because we both felt as if… the world has enough people in it. Have a child, couldn’t guarantee it will make anything better. But to take a child that’s suffering like you boys were. Give you a chance in the world. That’s something.”