The chronicles of history are filled with famous names,
Who’ve earned our generation’s praise or bear their age’s shames.
We think we know the few worthwhile players of the past,
And yet the world was shaped by more than names we learned in class.

Behind each role we’re tested on and public figure known
Were men and women, making crucial impacts of their own.
Perhaps they knew obscurity would be their likely end,
But history’s more hidden tales are those to recommend.
__________________

I’m honestly amazed that I did not already know the story of Katherine Johnson and her fellow black female compatriots at NASA. I remember noticing a theater display for Hidden Figures on my way out of watching Rogue One and thinking, “Oh, NASA—that might be interesting.” The same day I saw an episode of Timeless that featured Katherine Johnson as the historical figure of the week. That’s when I did some research and knew this was a film I had to see, which I finally did with my mom.

She used to work at Kennedy Space Center during the early Space Shuttle launches, and my grandfather was involved at a relatively high level in the Mercury, Gemini, Apollo, and Shuttle missions, so the space program means a lot to our family. Which makes it all the more astonishing that neither I nor my mom had ever heard of these “hidden figures,” who calculated trajectories and landing coordinates even better than their white, male coworkers. Taraji P. Henson plays Katherine Goble (eventually Johnson), whose knack for algebra earns her the role of “computer” for the Space Task Group, a thankless job of number-crunching with more than a little prejudice aimed her way. Also working at Virginia’s Langley Research Center are Mary Jackson (Janelle Monáe), who strives for the right to be an engineer, and Dorothy Vaughn (Oscar nominee Octavia Spencer), who seeks the elusive title of supervisor over her team of black female computers. In addition to the talented cast of African Americans, including Mahershala Ali as well, Kevin Costner delivers an excellent supporting role as Katherine’s no-nonsense boss who refuses to let bigotry impede the mission at hand. (I rather wish Costner had gotten a Supporting Actor nomination; Ed Harris did for Apollo 13, and there’s nothing Harris did that Costner doesn’t do just as well.) 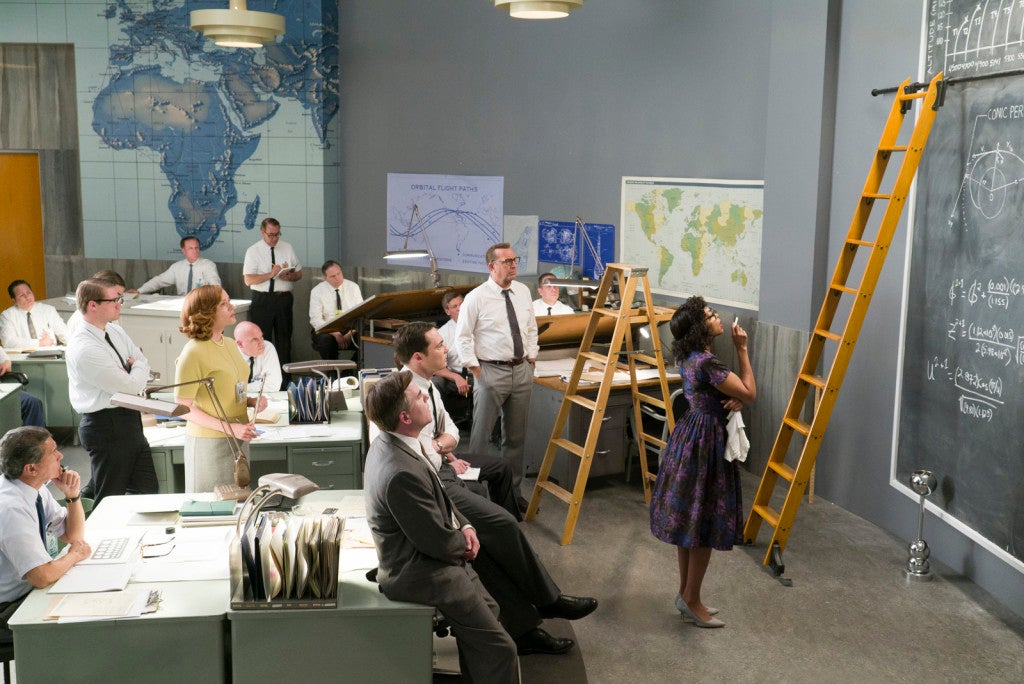 I expected to love Hidden Figures going in, with its inspiring role models and old-fashioned enlightenment of unsung history, and I did, perhaps not quite as much as I expected but not in any disappointing way. I felt that the racism early on was a bit heavy-handed, with entire rooms of white men staring at Katherine as if she had two heads, yet I wouldn’t be surprised if that was indeed how it was. Likewise, there are many historical liberties taken for the sake of the story, whether it be composite characters created to get points across or details streamlined to simplify the story. For instance, Costner is made to look like he’s running Mission Control, but he’s at Langley, not Houston. Yet, for the most part, I didn’t mind the license taken, since it served the story to no historical detriment. (There are some interesting true-to-life details thrown in, though, such as the flooring material that snags Mary Jackson’s high heel; my mom can attest to that annoyance.) I also don’t agree with the few complaints I’ve heard about the film’s predictable underdog conventions; when it’s done right, it makes for a great movie, and it’s never been done with these characters and this particular slice of history. For the record, my mom absolutely loved it, except maybe for some of the semi-repetitive soundtrack from Pharrell Williams.

Hidden Figures is a film I believe all African Americans, all women, and everyone else for that matter ought to see. Beyond being an entertaining true story, it’s a film rife with positive messages, both obvious and subtle. Mary Jackson and Dorothy Vaughan may be bitter about their superiors’ scorn, but they don’t take it lying down. Dorothy herself tells Mary not to complain but to do something about it. It’s a court plea in Mary’s case, while Dorothy shows incredible foresight in noticing the incoming IBM meant to replace her human computers and becoming an expert in computer coding to make herself and her team valuable. Her visit to the library is backdropped by a street protest, and while the protest clearly got more attention at the time, it’s her attempts at personal betterment that are more laudable.

While Hidden Figures may follow familiar story beats, it’s a marvelously acted feel-good film that ennobles intelligence and mathematics and casts a long overdue spotlight on the unrecognized heroines of NASA. Even if the initial reactions of their biased coworkers can be frustrating, the talent and intellect they displayed are undeniable, as is the satisfaction of seeing it vindicated. They served their nation well, and there was no color-coding to the worry and interest directed at sending Americans into space, evident from black and white families both anxiously watching John Glenn’s historic flight. At our present point in history, what could be more inspiring?

Best line: (Katherine, responding to being underestimated) “I will have you know, I was the first Negro female student at West Virginia University Graduate School. On any given day, I analyze the binomial levels of air displacement, friction, and velocity. And compute over ten thousand calculations by cosine, square root, and lately analytic geometry. By hand. There are twenty bright, highly capable Negro women in the West Computing Group, and we’re proud to be doing our part for the country. So yes, they let women do some things at NASA, Mr. Johnson. And it’s not because we wear skirts. It’s because we wear glasses. Have a good day.”