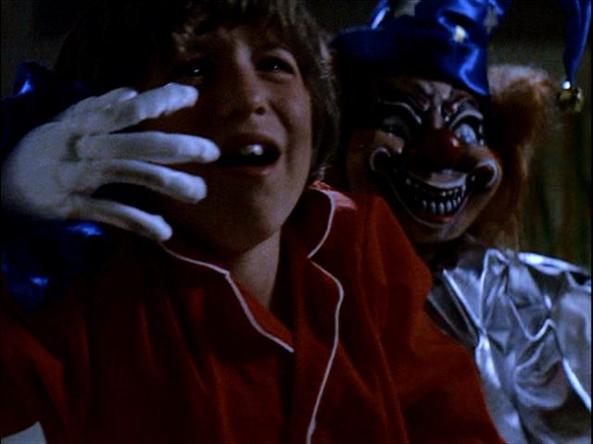 Hearing of hauntings may trouble a tenant
And give them some pause and concern.
A bump in the night or mysterious light
Conjures notions of ghosts who may fancy a fright
To make known their unholy return.

Yet others believe their house couldn’t be haunted.
It’s mortgaged and newer than most.
But those are the ones who don’t know what they did
Till a closet or tree tries to gobble a kid.
Sure, then they’ll believe there’s a ghost.

So if you see signs of a spook or a spectre,
You’d best take it seriously.
Don’t wait for a coffin to pop from the floor
Before getting the heck out of Dodge evermore.
Less sequels the sooner you flee.
_______________

This is it, the movie I’ve been avoiding for years. I saw Poltergeist for the first time when I was about ten years old (I think), which was around the same time I saw Aliens. While I didn’t seem to have a problem with chest-bursting extra-terrestrials, I consider Poltergeist the movie that traumatized me, and it was all because of that one scene. Not the tree scene or the steak scene or the giant demonic head jumping out of the closet. No, it was the clown! I could handle the entirety of Stephen King’s It (albeit some years later), but a single jump scare involving a clown doll made me swear off this movie for over a decade!

However, now that I am my more mature self, I decided to brave Poltergeist once more, and truth be told, it’s not that bad. By that, I mean it’s a decent haunted house film, but it’s nowhere near as nightmarish as I recalled. With Steven Spielberg as writer and producer, the film’s pre-horror opening has an E.T.–style charm, setting up the Freelings as a typical happy suburban family.  Craig T. Nelson and JoBeth Williams are sympathetic as Steven and Diane Freeling, cutely fascinated by the supernatural occurrences they notice until they discover that their home sucks…literally. Trees suck you in; closets suck you in; swimming pools full of corpses suck you in; it’s a madhouse!

The creepiness begins early with young Carol Anne (Heather O’Rourke) in front of the iconic snowy television but remains mild for a while, and even after Carol Anne is abducted by the ghosts, a few touches of humor keep the film lighter than the dark mood most horrors try to achieve. Except for a rather shocking hallucination in a bathroom with the only violence to speak of, the film doesn’t aspire to full-blown horror until the end, starting with the infamous clown and going all-out with a scream-filled finale.

There are a few logic issues I couldn’t help noticing, particularly that the title doesn’t seem to fit. A parapsychologist (Beatrice Straight) helping the Freelings talks about how poltergeists are connected with a person, like Carol Anne, while hauntings are linked to a certain location. While Carol Anne’s importance seems to support the former, the end reveals that, no, it was the house and thus a haunting. A minor complaint, I know, but it’s true. In addition, the timing of the finale may make sense for horror pacing (false sense of security and then boo!), but it seemed odd after the house was supposedly “clean,” throwing the spiritual mumbo-jumbo and wisdom of Zelda Rubinstein’s psychic medium into doubt. Plus, while most of the acting is solid, the constant yelling of “Carol Anne!” and the screaming at the end (“What’s happening?????!!!!!!”) are a little overdone.

Poltergeist is a horror classic for good reason, not only offering some manageable, mostly kid-friendly frights in a decade full of slashers but also explaining why the cable companies got rid of the late-night snow. Perhaps it’s because I’ve seen scarier and more compelling horrors since, like The Conjuring and the film for my last Halloween review for Sunday, but Poltergeist has lost much of its fear factor, for me at least. I suppose it’s like the basement in Home Alone or any number of scary things from our childhoods; with light and a little perspective, they aren’t so scary after all. Except that clown! It still gives me the willies.