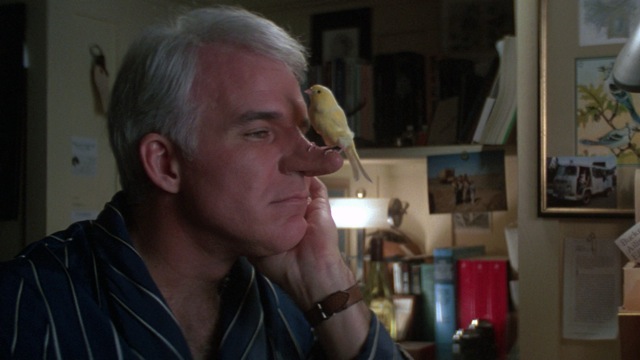 ‘Tis no simple means
By which women are wooed.
‘Tis not for the boorish
Or foolishly rude.
The poets have proffered
And songsters suggest
What romantic remarks
Are the sweetest and best.

And men have spent centuries
On making sense
Of how to atone
After giving offense.
The language of love
Is a varied pastime,
And most would agree
‘Tis a mount worth the climb.

Roxanne, which my VC has been urging me to review for some time, features Steve Martin at his most charming. Martin himself adapted the 1897 play Cyrano de Bergerac (which interestingly provided the English language with the word “panache”) into this modern comedic retelling. The major events of the famous love triangle are faithfully translated from 17th century France to picturesque Nelson, Washington in the 1980s. Martin is C.D. Bales, the effortlessly charismatic fire chief who knows how to castigate those who insult his unusually long nose, while Daryl Hannah is his crush Roxanne, who is sadly enamored of the handsome numbskull Chris (Rick Rossovich).

To me, Roxanne is a film that excels in individual moments much more than the big picture. There are some brilliant comedic scenes, such as C.D.’s listing off twenty witty ways to insult his nose or the hilarious balcony scene (“I was afraid of worms, Roxanne! Worms!”), and I always get a good chuckle out of C.D.’s sexual teasing of a gaggle of gullible old ladies.

Yet, even with the verbal cleverness and the slapstick of C.D.’s bumbling fire crew, the romantic plot has never seemed particularly memorable to me. Martin certainly sells his eloquent passion for Roxanne, and Daryl Hannah is a beautiful love interest (a good normal role as opposed to her acting strange in Splash and Legal Eagles). Their love is worth rooting for, and I was reasonably satisfied by the end. Yet the original play concludes tragically, and Martin’s invented happy ending does feel rather easy and tacked on, earning just a smile rather than the grinning sigh that the best rom coms achieve. It may not make it one of my favorites, but Roxanne has enough “panache” to be a worthwhile charmer.