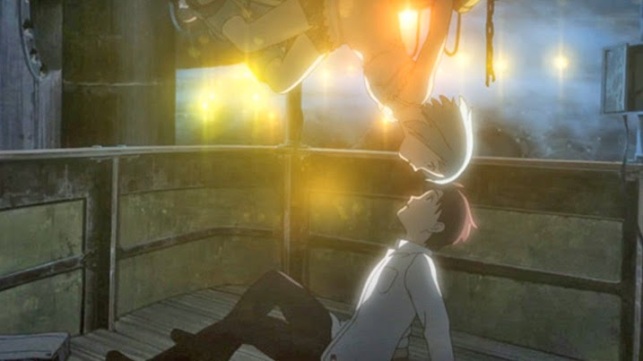 Right-side up is upside down
To those who smile when they frown,
To those who plunge whene’er they jump
Or rise when tripping on a bump
Or gobble down and up their meals
And sink a little in high heels,
To those who elevate a bit
If they lean over, kneel, or sit,
To those who set a precedent
When they descend on their ascent.
Up and down can be subjective.
‘Tis a matter of perspective.
____________________

For the next Cartoon Comparison, I’ve chosen two science fiction films with wildly imaginative concepts that happen to be suspiciously similar. Both the live-action Upside Down from Canada and the anime Patema Inverted from Japan feature the idea of opposite gravities: people walking on the ceilings, objects falling up, and the unlikelihood of two oppositely oriented young people overcoming the hatred of their politically hostile worlds. What differs is the way their worlds interact and the pseudo-scientific “explanation” for the curious gravitational situation.

Upside Down came first so if there was any copying being done, the live-action film can claim to be the original. Here, as explained by the narration of Adam (Jim Sturgess), two planets orbit each other so closely that there is essentially no sky. Looking up from either world, one simply sees the other planet’s surface, about as far away as a skyscraper, echoing perhaps the folding city street in Inception. One planet is considered Up Top, full of wealth and societal power, while the other is the economically exploited Down Below, though there’s no telling how they were named, considering the potential confusion of “up” and “down.” Luckily, the extraordinary visuals elevate the film’s none-too-subtle class struggle. Even if there were moments that I wasn’t sure what I was seeing at first, the remarkable effects were a marvel to the eye.

As for the love story, Adam from Down Below happens to meet Eden (Kirsten Dunst) from Up Top, and they share remote romantic rendezvous in the mountains until the government breaks them apart. Years later, as Adam experiments with a practical anti-gravity serum, he seizes a chance to see Eden again at Transworld, the tower-like corporate bridge between the two worlds. The two leads certainly have chemistry, but due to a certain plot point, they don’t get to take much advantage of it, and Sturgess’s behavior can be awkward at times.

Yet Adam’s quest to reunite with Eden without being caught by the authorities leads to a good deal of inventiveness, such as his attempt to weigh himself “up” and pose as a citizen of Up Top. Unfortunately, logic gets in the way at times, including the film’s own invented gravitational rules. For instance, Adam never seems to have a problem with the blood flowing to his head when upside down. Wouldn’t that be both uncomfortable and a possible give-away to anyone who might notice? In addition, one of the planetary laws is that matter from opposite worlds eventually burns, but the time it takes for this to happen seems inconsistent. By film’s end, the conclusion is peculiarly rushed, offering a blanket resolution to crucial issues it couldn’t hope to address and doesn’t try. Upside Down is brilliant in concept, less so in execution, but the visuals alone are worth the watch.

Upside Down may have come first, but Patema Inverted utilizes the notion of inverse gravity far better, in my opinion. Perhaps the fantastical image of falling up is simply more credible in animation rather than live-action CGI, but it certainly captured the imagination of director Yasuhiro Yoshiura, who previously directed the compelling series-turned-movie Time of Eve. (I was impressed by both Patema and Time of Eve separately but didn’t realize till afterward that they shared the same director.)

Instead of the up-front exposition of Upside Down, Patema Inverted takes its time to show and develop the gravitational anomalies as the characters discover them. Patema is a girl living in a City of Ember-like underground bunker and seems to be one of the few inhabitants to show an interest in the Forbidden Zone, where dust floats upward and “bat people” are rumored to lurk. After a close encounter, she finds herself dangling from a fence with the sky looming “below” her. Luckily, she is saved by the equally curious surface boy Age, who seems upside down to her. Age lives under a totalitarian dystopian government, whose leader is determined to root out the surviving inverts, who made their way underground after a catastrophic accident sent most of them falling into the sky years ago.

Upside Down basically lacked any sky; there was only so far someone could fall. Patema Inverted, however, makes the sky an imposing threat, a beautiful but dangerous abyss ready to swallow Patema without Age’s assistance. The animation is frequently dazzling, especially when the point of view shifts to contrast Age’s perspective with Patema’s. As Patema ventures into Age’s world and he ventures into hers, the distinction of up and down becomes fluid. The plot even takes some initially confusing twists that challenge the viewer’s perceptions and require some extra thought to fully comprehend. Some might be befuddled, but I found it fascinating. Plus, the musical score is enchanting and perfectly complements the film, including the gorgeous credits song “Patema Inverse,” which is sung in Esperanto and earns a place in the End Credits Song Hall of Fame. Between this and Time of Eve, I’m definitely hoping that Yoshiura continues to create such intriguing films.

I will admit that Patema Inverted seems to draw some inspiration from Upside Down. The cause of the inverted gravity differs (natural phenomenon vs. manmade disaster), but how the two gravities interact is the same: the lesser weight lightens the gravity of the other. This leads to the couples in both films holding on to each other to prevent the other from falling away, and being able to defy gravity by using each other’s weight. Writing about it doesn’t seem to do it justice, but it’s clever, cool, and undeniably similar in both films. As original as Patema Inverted is, I can’t help but wonder how much inspiration it drew from the earlier film. In addition, Patema is also rather slow in its gradual plot progression, and the villain is stereotypically bad for bad’s sake.

Despite these minor “down”-sides, Patema Inverted is easily the better film. Upside Down may have brought gravitational sci-fi to life first, but its conventional plot can’t compare with the thought-provoking vision of its animated counterpart.

Best line from Upside Down: (Adam) “Gravity, they say you can’t fight it. Well, I disagree. What if love was stronger than gravity?”

Best line from Patema Inverted: (Age, when holding onto Patema) “I get it! Your weight makes me light.”  (Patema) “Girls don’t like it when you talk like that!”