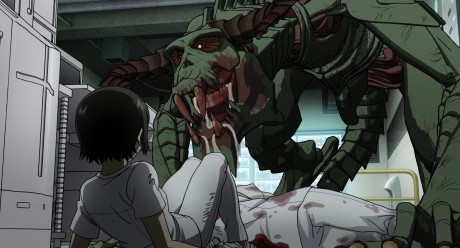 The world was collapsing
With panic forecast
And death in the news everyday,
Yet we were persuaded
That one short sleep passed
Would sweep the dark future away.

We woke to a nightmare
More dire than the last,
Confronted and hunted and trapped.
We slept to thwart death,
Which would not be outclassed
By sleepers with secrets untapped.
________________

MPAA rating: Not Rated (should be R)

One movie-watching emotion that I especially love and rarely get the chance to experience is the feeling of having my mind blown. The best example I can point to for that would be Inception, and to a lesser extent The Prestige, both Christopher Nolan features with unspoiled twists and a provocative narrative boldness. All too often the twist is either spoiled for me (Predestination, The Sixth Sense) or it’s not all that surprising (The Usual Suspects, Interstellar), so when a film provides me with that rare blend of shock and wonder, I treasure it. King of Thorn did just that.

I had heard that this anime film was a combination of Inception, Aliens, and Lost, and…that’s exactly what it is, with a little Matrix and Akira thrown in for good measure. In the first scene, we see a woman commit suicide by jumping off a building, but when she lands, her body shatters, revealing the effects of a new fatal disease dubbed the Medusa virus. This plague that turns humans to stone quickly becomes a worldwide pandemic; in response, the Venus Gate organization selects 160 infected individuals to be put into a Cold Sleep until a cure can be found. When the diverse group is awakened from stasis, surrounded by thorny vines, a horde of monsters attacks them, thinning the herd (not unlike the plane crash at the beginning of Lost) in a scene sure to make you even more afraid of falling down an elevator shaft. Only seven survive, including timid Kasumi, who had to leave her twin sister behind and now must survive with the others and escape from this nightmare.

Now the typical viewer might think that they slept in stasis for hundreds of years to awaken in a post-apocalyptic future, and that’s actually exactly what the characters assume at first. But let’s just say there’s more to it, a lot more. Almost every character has a secret or a past trauma, and the plot twists just keep coming. Like Lost, the film even teases suggestions of what is really going on. Is all of this a dream? Did Kasumi and her sister somehow switch places? There’s no way I’m going to spoil it, though, and I guarantee you that you’ll be kept guessing right up to the last ten minutes.

Because King of Thorn is so packed with plot, from repeated flashbacks that slowly reveal more to overly explanatory references to Sleeping Beauty, it’s not surprising that not everything gets a resolution. Some plot points are dropped without a second glance, and the ending doesn’t even try to address a major uncertainty. Plus, even if I think I understand how everything came about, I’m not sure I get why it all happened the way it did, perhaps due to the significant omissions from the manga the film is based upon (which everyone who’s read it seems to agree is better than the film). Yet the fast-paced action and thought-provoking narrative made up for these faults. If you’re one of those people who hated all the loose threads in Lost, King of Thorn will leave you equally perplexed; but I for one didn’t mind at all, and I know quite a few friends and fellow bloggers who would find this film fascinating. I’ve already introduced it to a friend of mine, and he loved it.

On the down side, it’s a film worthy of an R rating, with gruesome killings and a little nudity toward the end. Yet, the gore was far from constant, and like Aliens, it’s the kind of violence one can easily see coming and just turn away from at the right moment. At least, that’s what I did. As for the question of whether to see the subtitled or dubbed version, both have their strengths. The English dub features accents that make it clear that the survivors are from around the world (British, Italian, American, Australian), but it also has the foul language one would expect from an R-rated horror thriller. If you care about avoiding profanity, the original subtitles have far less.

Despite the few negatives, King of Thorn is an exceptional sci-fi thriller that played with my mind in the best way and even managed to touch the heart. The cast of characters are all unique and sympathetic as their back stories are clarified, and the music adds to an epic sense of mystery, especially in the early scenes. (The song “Edge of This World” also earns entrance to the End Credits Song Hall of Fame.) The animation beautifully brought to life both the thrilling and the grotesque, and even if some might complain about the occasional merging of 2D and 3D animation in the action scenes, I didn’t find it distracting. In the days since I first saw it, King of Thorn has only risen in my estimation, and while it might further mess up my original Top Twelve Anime List, I think I’ve got another favorite to add.

Best line: (Marco) “Even if you’re overcome by unspeakable loneliness, endure it and encourage someone who can follow where you left off.”