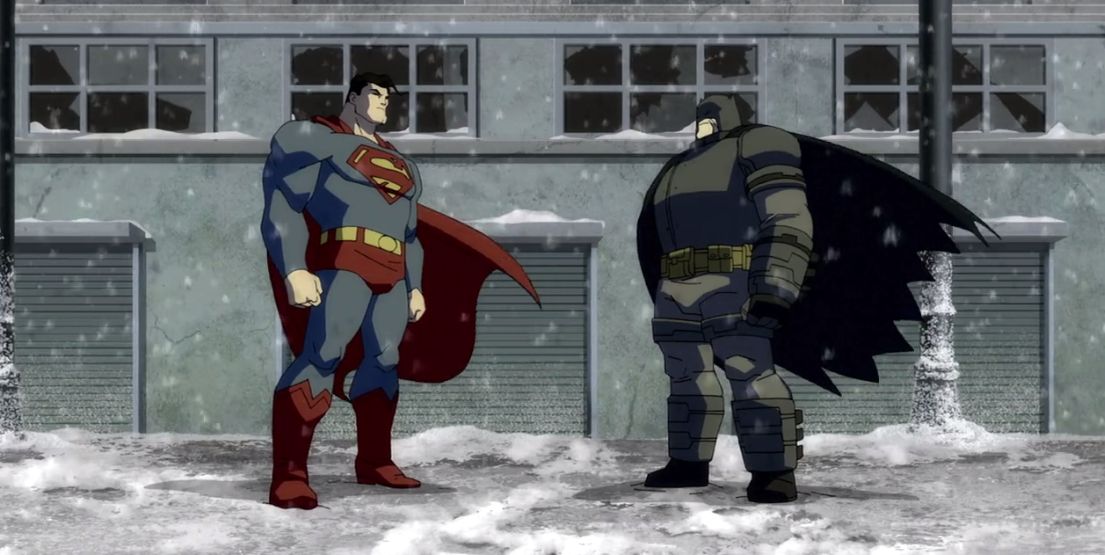 Titans once clashed in the Greek myths of old,
When swords were the weapon of man sandal-soled.
Men marveled at stories of inhuman glories,
Which none had the privilege or chance to behold.

Now the world watches for titans once more,
For angels and devils to fear or adore,
And mythical quarrels with optional morals
Are thrills for mankind, as they were long before.
_________________

I should start out by saying that I am unapologetically a Marvel fan. Everyone has their preference, and I tend to think that those more drawn to DC or Marvel are more likely to forgive their movies’ faults. For example, one of my coworkers is a DC purist and loves to poke holes in Marvel movies while making excuses for films like Batman v Superman. One thing, though, that I find uncontestable (but I know many do contest) is that in recent years, Marvel films have taken the lead and DC is now struggling to keep up. Oddly, DC seems to be doing the opposite of Marvel; instead of introducing each hero in their own movie and bringing them together Avengers-style, DC is tossing in the likes of Wonder Woman and the Flash without much explanation and then providing a stand-alone film. I know DC is trying to differentiate itself from Marvel, but it’s a strange creative choice that doesn’t lend itself to a cohesive setup.

Honestly, I wasn’t too eager to see Zack Snyder’s Batman v Superman. The trailers were meh, the reviews were worse, and Man of Steel didn’t exactly thrill me as the beginning of a new superhero universe. Yet, with all the other DC films planned to follow, I felt I should give it a try, if only to keep up with the curve. Was it terrible? No. Was it anywhere near good Marvel? No. It was certainly better than I expected, and I found it to be a solid serious take on the DC heroes, particularly Batman, played with surprising intensity by Ben Affleck. While watching it, my main complaints were simply facts of its existence: it’s very dark, very serious, and very long. It still kept my interest through its 181-minute runtime with its mostly sound acting, cleverly symbolic dialogue, and periodic bursts of action, but boy, are there flaws! It’s just that its flaws were more noticeable after the fact than during the movie, and I’m not sure if that’s to the film’s advantage or detriment.

I suppose my biggest qualm going in was the very concept of Superman and Batman fighting each other, even though it has precedent in the comics. I loved Captain America: Civil War, but I don’t want the good guys to clash among themselves too much. Thankfully, that’s one thing that Batman v Superman does fairly well. Superman’s issues with Batman have to do with his shadowy vigilantism, but Batman’s objections to the Son of Krypton are more deep-seated, stemming from the rampant destruction that made Man of Steel notorious. One must keep in mind that these characters don’t know each other’s intentions, and I could understand Bruce Wayne’s distrust of a godlike alien. Even so, I felt that all of the anti-Superman rhetoric was rather narrow-minded. Most people wouldn’t blame a fireman for only being able to save half of the people in a fire, yet everyone seems to question Superman’s motivations, focusing on the one or two uncertain events instead of the countless lives he does save. No wonder Henry Cavill’s Superman acts so grim and depressed; note to the writers, Batman is supposed to be the brooding one.

There are smaller nitpicks too, such as Jesse Eisenberg’s youthful, God-haunted Lex Luthor, who seems more obviously crazy than the charisma of Gene Hackman’s original or even Kevin Spacey’s knock-off. A friend of mine said Eisenberg would have made a better Riddler, and I tend to agree. The film is also far from cohesive, with plot threads weaving all over the place, and a foreshadowing dream sequence has some unexpected predictive elements sure to confuse the uninitiated. As for the big brawl that may or may not have made DC fans geek out, it’s well set-up and well executed but ends with a semi-obvious plot twist that gets more stupid the more I think about it. Naturally, Batman and Superman couldn’t stay enemies for long, but the turnaround is sudden to the point of absurdity. At least, Gal Gadot’s Wonder Woman does make a nice if underused debut, and I’m actually more interested to see her movie than another Batman/Superman pairing. In trying so hard to set up the upcoming Justice League films, Batman v Superman offers much to appreciate and much to criticize, and it’s all a bit…much. I’m not saying Marvel is perfect either, but at least they’ve found a formula that works. DC is still struggling to find their feet, and, even if they have the spectacle, I’m dubious that they can reach the same level of entertainment.

Now for The Dark Knight Returns, which was broken up into a Part 1 and Part 2, both of which are about the same length as Batman v Superman when combined. I used to watch the animated Justice League on TV, but I’m not as familiar with the more recent direct-to-video animated films that lean more on the mature side. The Dark Knight Returns was my first exposure to these, and I see why it has been acclaimed and, despite the different storylines of each film, recognize several similarities with Batman v Superman. Among the aspects it shares with Zack Snyder’s film are the Batman/Superman fight (of course) complete with kryptonite gas, a line from Bruce reminding someone that “We’re criminals. We always have been,” repeated news reports debating the legitimacy of unsupervised heroism, an unexpected televised massacre, a nuclear explosion with Superman high in the atmosphere, and an ending funeral scene, in which the two movies have the characters’ places switched.

Unlike Batman v Superman, where Superman is still a new hero for Earth and Batman is a somewhat older than usual version, having already assumedly beaten the rogues to be seen in Suicide Squad, The Dark Knight Returns features a much older Batman in the 80s, who has retired from hero work after the death of his second Robin named Jason. With Gotham City being terrorized by a violent gang called the Mutants and the return of a supposedly rehabilitated Two-Face, Bruce Wayne decides to “return” as the hero it needs and deserves. As his crusade continues in Part 2, he also battles the once-catatonic Joker and eventually Superman himself, aided by the young Carrie Kelley as the new Robin.

Part of what sets The Dark Knight Returns above its live-action counterpart, in addition to its more focused narrative that still covers a lot of ground, is the sense of history among the characters without showing it all. Batman is haunted by the deaths he couldn’t prevent, even telling the Joker he blames himself for allowing his foe’s killing spree to last so long, but he acts with the sureness of experience. The police have a varying reaction to the Dark Knight; those like Commissioner Gordon who remember Batman’s past heroics welcome him with a hands-off policy, while the newer recruits and incoming Commissioner Ellen Yindel see him as merely one more violent influence on Gotham City. Debates rage on the news and talk shows over whether Batman should be admired or arrested, with one know-it-all psychiatrist especially criticizing him with some good points, but the mix of opinions is a bit more balanced than the backlash in Batman v Superman. We even get some cameos from much older Selina Kyle and a grizzled Oliver Queen/Green Arrow (who has one arm for some reason, reflecting that unseen history I mentioned earlier).

The Dark Knight Returns also boasts a stellar voice cast, led by Peter Weller of Robocop as Batman. Also (Lost alert!), Michael Emerson, who played such a great villain in Ben Linus, brings a similar ruthless sneer to the Joker. As for Batman’s climactic clash with Superman, it plays out rather similarly, but for entirely different reasons. It goes back to the history they have with each other in this post-Justice League world, and interestingly the reason is more like that in Captain America: Civil War than in Batman v Superman. Unlike Zack Snyder’s Man of Steel, this Superman directly supports the U.S. government and its Reagan-esque President and is sent to put a stop to Batman’s vigilante brand of justice. They clearly disagree, but even in the heat of battle, their respect for each other causes them to hold back. And it doesn’t end with a silly twist so it’s arguably a better confrontation, which is more of a symbolic clash of ideals than the death battle in Batman v Superman.

Another point where The Dark Knight Returns has it over Batman v Superman is its depiction of Batman’s conscience. Both Batman and Superman are well-known for their refusal to kill their villains, which of course lets them come back repeatedly, but Zack Snyder seems to have ignored that fact. I didn’t notice at first, caught up in the impressive action sequences, but Affleck’s Batman doesn’t seem to mind smashing cars into people and general murder of the bad guys, perhaps owing to that “feeling of powerlessness that turns good men cruel,” as Jeremy Irons’s Alfred says. The Dark Knight Returns’s Batman, however, takes care to leave his baddies alive, only coming close to killing when pushed to his limit; one especially cool rampage in the tank-like Batmobile makes a point of using rubber bullets to incapacitate the Mutant gang without killing them.

Despite the upheld ban on killing, there is quite a bit of violence and some nudity for a PG-13 cartoon. Some of the fistfights are vicious, and while the more gruesome scenes are left offscreen, it doesn’t shy away from blood, mainly in scenes with the Joker. Not to mention, the Joker has a Batarang sticking out of his eye for a while so I can’t help but think an R rating might have been more deserved. Likewise, Batman v Superman has its fair share of brutality, though comparatively little blood.

Both Batman v Superman: Dawn of Justice and The Dark Knight Returns have their strengths and weaknesses. The former is gritty and well-acted for the most part with a jam-packed plot that will likely reward repeat viewings, but its overstuffed length and particularly drab treatment of Superman aren’t about to make it a classic either. The Dark Knight Returns is clearly a stronger film, though that’s owed to its acclaimed source material which didn’t have to set up a whole superhero universe through cameos. The animation is nothing special but it illustrates the story well; the older Batman is a wise and responsible version of the hero who is still susceptible to human weakness and grief yet manages to even rally the citizens of Gotham to his cause. Despite the violence, some weird unexplained slang, and several loose ends left open, such as the Cold War entanglements, The Dark Knight Returns is a strong Batman movie and proves why DC often seems so much more suited to the animated realm (and TV, like Arrow). I won’t begrudge DC fans the pleasure of seeing their favorite heroes in live action on the big screen, but Marvel does it so much better. Only time will tell if that holds true for DC’s future line-up.

Best line from Batman v Superman: Dawn of Justice: (Lex Luthor, actually offering a good point) “You don’t need to use a silver bullet. But if you forge one, you don’t need to depend on the kindness of monsters.”

Best line from The Dark Knight Returns (the real best line is a spoiler but this one will do): (Alfred) “If it’s suicide you’re after, I have an old family recipe. It’s slow and painful. You’d like it.”