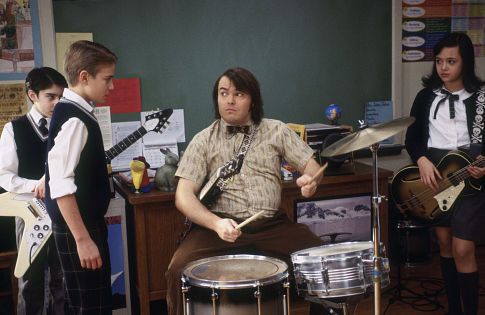 Knowing next to nothing,
Except for rock and roll
May well get you nothing
Resembling a goal.

Roll the rock,
Rock the roll,
If the music’s
In your soul.
Getting paid
For it, though—
It may be rare, but that’s the way to go.

If you want to try and buck “the Man’s” control,
Takes passion to go make your own goal.

Don’t you love it when you expect very little from a movie and end up enjoying it far more than you thought possible? I found that the case with School of Rock, a comedy that many seem to consider a classic and yet I never have had any desire to see. I suppose it’s Jack Black that turned me away; I’ve always considered his comedy odd and lowbrow, akin to Adam Sandler’s, and yet what little I’ve seen of his, I’ve liked. He was good in Shallow Hal and The Muppets and the Kung Fu Panda movies, quite good in King Kong, and more charmingly low-key in The Holiday. I should really check out more of his movies, since both my VC and I thoroughly enjoyed School of Rock.

Black starts out as the kind of slobbish loser he seems to enjoy playing, a jobless rocker named Dewey Finn, who is kicked out of his own band after a pathetic concert. Living with his former bandmate Ned Schneebly (screenwriter Mike White) and Ned’s overbearing girlfriend (Sarah Silverman), Dewey’s life and career are going nowhere fast, and when Ned “demands” the rent he’d owed, there’s only one reasonable thing to do. Dewey impersonates Ned as a substitute teacher at an elite prep school, which strangely checks neither his references nor his ID. Faced with a class full of fourth-graders better educated than himself, Dewey trains them in his one area of expertise – classic rock – and prepares them to participate in a “Battle of the Bands” while trying to keep everything secret from their parents, Ned, and the uptight school principal Ms. Mullins (Joan Cusack).

The implausible setup alone is ripe with comedic opportunities, and the film rarely misses a beat. From Dewey’s rant against “the Man” to his students’ faking a blood disease, the dialogue finds the right balance between funny and believable. Aside from the general humor, though, School of Rock’s greatest appeal is to anyone who has ever banged their head to AC/DC or Fleetwood Mac or Led Zeppelin; not only are many classic rock songs played and sampled, but Black praises and explains them with such infectious gusto that both audience and class are won over, despite his quirky ineptitude.

Another plus is how Dewey manages to “touch” his students (figuratively): encouraging the shy boy who’s convinced himself he’s uncool, sympathizing with an overweight girl, showing some maturity by enforcing discipline with one kid who takes his reckless teaching to heart. There’s a bit of smart-mouthing by the kids, but both they and Dewey manage to grow while still remaining uniquely themselves. It was also nice to recognize young overachiever Summer as Miranda Cosgrove, who went on to play evil sister Megan on Drake and Josh. (I grew up with that show. I know she can sing, so it was odd that she pretended to be a poor singer here.) Even the final concert delivered on the expectations that had been growing throughout the movie, only making me wish that the performance could have been longer.

School of Rock is still popular today, spawning a Broadway play and a Nickelodeon TV series just this past year, and I now see why. Since she’s a bigger rock fan than I, my VC enjoyed it even more; she even started watching it again as soon as it was over. It’s not often that a film totally exceeds my expectations, but if you’ll forgive the pun, School of Rock rocks!