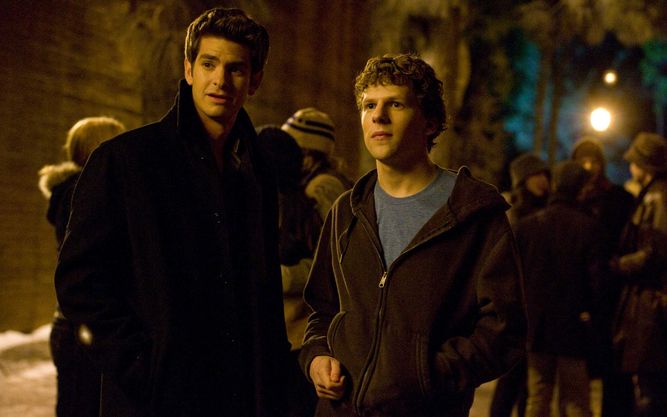 (Big thanks to NaPoWriMo.net for featuring my Austenland poem today! Today’s prompt, though, was to write a poem beginning with a line from another poem. I’ve actually had in mind to do that for this review for a while, so I incorporated a line from one of my favorite poems, Longfellow’s “A Psalm of Life.”)

Lives of great men all remind us
Even they can act like jerks,
Even when they build a website
Quick to grow that really works.

Websites are a dime a dozen,
But when fame and wealth are earned,
Some regret their path because in
Burning bridges, all are burned.

When one’s social enterprising
Gains more enemies than friends,
Even great men ask while rising
If the means made worth the ends.
__________________

Despite all the awards and adulation and bloggers including it among their favorite movies, I honestly had little desire to see The Social Network and for one simple reason: I don’t use Facebook. I know that seems weird for a college guy in today’s hashtagging, selfie-loving world, but social networking has never been of interest to me; and while Mark Zuckerberg’s rise to millionaire is an American success story, I didn’t expect to be interested in a film about the creation of something I don’t use.

Leave it to Aaron Sorkin to prove me wrong. Some screenwriters just know how to write dialogue (Nora Ephron, for example), and then there are the few like Sorkin who write dialogue on steroids. His Oscar-winning screenplay probably boasts two or three times as many words as the typical Oscar nominee, and the consistently talented cast articulate it with the cadence of a machine gun, particularly Jesse Eisenberg as Zuckerberg.

Eisenberg’s version of the college-age billionaire is obviously so smart that he never even has to think before responding, though he’d surely have more friends if he did think, since his responses usually come with enough caustic banter to make Will Hunting blush. His capabilities with website creation are quickly made clear after losing his girlfriend turns into a drunken blog rant and then a sophisticated, network-crashing girl comparison site. Approached by the Winklevoss twins (both played by Armie Hammer) and Divya Narendra (Max Minghella) to develop a dating site for Harvard, Zuckerberg instead teams with his friend Eduardo Saverin (surprisingly excellent Andrew Garfield) to create The Facebook, the concept and extent of which evolves swiftly into what so many people now check one hundred times a day. Unfortunately, as Zuckerberg expands and gains the dubious collaboration of Napster founder Sean Parker (also surprisingly excellent Justin Timberlake), Saverin gets left behind both technologically and financially, and both he and the Winklevosses file separate lawsuits against Zuckerberg. If placed at the end, these legal proceedings would have dragged the film down, so instead the depositions are expertly sprinkled among flashbacks.

Winning Oscars for Best Adapted Screenplay, Best Score, and Best Film Editing, The Social Network boldly confirms the fact that nerds will inherit the earth, but even bolder is the fact that such a high-profile biopic was made about a 26-year-old (at the time) creator of a six-year-old website, which might have easily been a fading fad like Myspace. One might consider it an honor, but the film’s depiction of Zuckerberg could hardly be called flattering. While key, real-life events were used in the story, Zuckerberg himself has written much of the film off as fiction, which I find rather probable. He criticized the characters’ wild partying, for example, and I too believe that multi-billion-dollar corporations are most likely built on a bit more restraint and discipline, which aren’t as entertaining in a movie.

Despite the likely liberties taken by Sorkin, his treatment of Facebook itself is laudably balanced. On the one hand, he shows that it revolutionized how collegiate students and everyone else interact with one another. On the other, that very cultural revolution is sarcastically faulted for the shallow change in social life that has kept me away from Facebook in the first place. Likewise, the film’s Mark is a genius and a visionary deserving of praise, but a regrettable current of callousness often lurks beneath the admirable. While I have a better appreciation for it, I must admit that I won’t be joining Facebook any time soon.

Best line: (Zuckerberg) “I’m not a bad guy.”
(Marylin Delpy, a lawyer) “I know that. When there’s emotional testimony, I assume that 85% of it is exaggeration.”
(Zuckerberg) “And the other fifteen?”
(Delpy) “Perjury. Creation myths need a devil.”