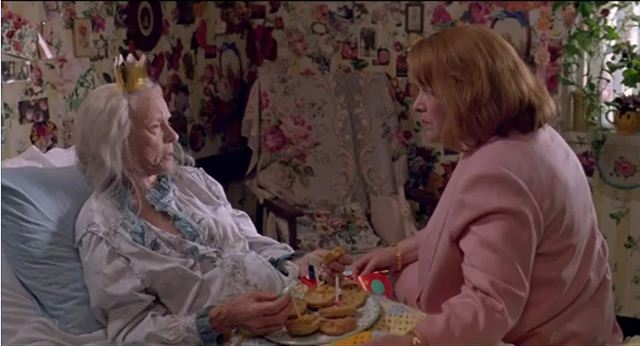 (Today’s NaPoWriMo prompt was a challenge to capture “the sound of home,” which in my family would be the South. Since my Floridian background isn’t nearly as colorful, I found inspiration and dialect in my mom’s memories of Alabama, which tied in nicely with this film.)

Well, honey, God’s given me plenty o’ years,
And plenty o’ troubles I’ve faced.
I reckon those years have had laughter and tears,
But not one o’ them was a waste.

Oh, bless her heart, Mama was wringing her hands
And said when my kids earned a lick,
I’d learn the stuff only a mom understands
Faster than you slap a tick.

When I was knee-deep in a whole heap o’ trouble,
I sure do remember each friend
Who offered a solace or busted my bubble
When phonier folk would pretend.

When I lie awake, doin’ poorly or well,
I listen with stubborn persistence,
Like when I was young, for the comforting swell
Of a train whistle off in the distance.

Based on Fannie Flagg’s novel, Fried Green Tomatoes could be considered another VC pick, because my VC sincerely likes it and I…can’t quite bring myself to do the same. Well, that’s not exactly right. I enjoy almost all of it, but it’s a rare example of a film that is almost completely undermined by one key plot point which turned me utterly against it.

First, I’ll focus on the good, most notably the actors. The casting is perfection, both in the 1980s present day and the Depression-era flashbacks, and both pairs of actresses have stellar chemistry. Kathy Bates as depressed housewife Evelyn draws confidence from the engaging stories of Jessica Tandy’s elderly Ninny (and utters one of the most empowering lines for middle-aged women everywhere). The subjects of those stories are equally appealing, with Mary Stuart Masterson playing the loyal tomboy Idgie to Mary-Louise Parker’s abused Ruth. A mystery plot involving the murder of Ruth’s brutish husband is competently strung along amidst both real and potential tragedy, a good deal of Southern charm and fond reminiscences, and the winsome establishment of Ruth and Idgie’s Whistle Stop Café. (I’m pretty sure there are several, but I’ve actually visited a Whistle Stop Café in Kentucky and sampled their fried green tomatoes while surrounded by memorabilia from the movie.)

With all this to appreciate, why then can I not quite embrace Fried Green Tomatoes? It all comes down to a climactic revelation in the murder mystery, which I won’t spoil, but no matter how much my VC has tried to justify the characters’ decision, it sickens me. Is it supposed to be empowering to women, as so many other parts of the film did so much better, like Bates’s priceless, hormone-fueled tirade against male injustice? Regardless, the-twist-that-shall-not-be-named comes late enough in the film that it left a bad taste in my mouth, even after the sweet ambiguity of the final scenes. I can usually look past a movie’s negative aspects, but this is one error in narrative judgment that sadly dampens an otherwise affable film.

Best line: (two obnoxious girls who steal a parking space) “Face it, lady, we’re younger and faster!” (Evelyn, after declaring the battle cry “Towanda!” and crashing into their car) “Face it girls, I’m older, and I have more insurance.”

VC’s best line: (Evelyn, caught up in her empowerment) “Towanda! Righter of Wrongs, Queen Beyond Compare!”   (Ninny) “How many of them hormones you takin’, honey?”