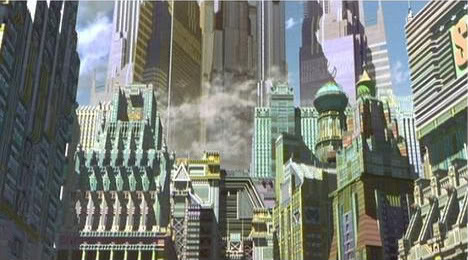 Up and up they build the tower;
Up and up ambition leads.
Further down, foundations sour
As equality recedes.

Bitter grows the patient base
And richer grows the wealthy crest.
Neither’s happy with their place,
And both believe that they know best.

This will be the beginning of a new feature called Cartoon Comparisons, in which I will compare and contrast a live-action and animated film that share plot elements or source material. I didn’t realize it at the time, but my first stab at this was my double review of Ordinary People and Colorful, after which I discovered several other pairs of films to consider. For this Cartoon Comparison, I’ll be tackling the silent-era German classic Metropolis and the 2001 anime adaptation, also called Metropolis.

I haven’t seen a great many silent films, but most seem to be relatively short so as not to overstay their welcome. Fritz Lang’s Metropolis, at least in its most restored version, clocks in at nearly 2½ hours, a daunting runtime that’s long by talkie standards. Until recently, my only exposure to Metropolis was in Queen’s music video for “Radio Ga Ga,” which shows many of the film’s most impressive special effects, expansive skylines with tiny moving vehicles and floating ships that still beg the question “How did they do that in the 1920s?!” The art deco set design is consistently impressive so that even if some viewers start getting bored, architectural enthusiasts shouldn’t. Being familiar with only the film’s visual style, I was surprised at the high-minded plot, which includes a despotic industrialist, his sympathetic son Freder, a peace-urging love interest named Maria, and a mad scientist who creates a robot to become Maria’s evil doppelganger.

The film clearly owes its classic status to its interesting story and memorable imagery, but the usual complaints and conventions of black-and-white silent pictures apply, even more than usual due to its length. When characters are in love or shock, they hold their hands over their heart; when they’re tired, they conspicuously wipe their brow; when they’re scared, they practically have a seizure. Brigitte Helm does double duty as both the demure, angelic Maria and her wicked robot copy, who indulges in weirdly reptilian movements and is over-literally equated with the Whore of Babylon.

Despite the silent-era excesses (like most of the men wearing lipstick), many elements still hold resonance. Some are visually striking, such as Maria being chased by a flashlight’s glow, the flooding of the worker city, and the climactic fight with shades of The Hunchback of Notre Dame. One of the most notable social aspects was the tension between the poor working class and the wealthy elite, led by Freder’s father. The evil Maria takes advantage of the oppressed workers to incite riots and impulsive fury, which cause more problems and grief than they fix. Even in 1927, before Hitler’s Germany or more recent threats of rioting, Metropolis served as a warning against blind proletarian rage in favor of understanding on both sides. It’s a drawn-out, melodramatic test of one’s patience but one ultimately worthy of all the critical appreciation.

Now for the 2001 anime film of the same name. This Metropolis is based on the 1927 film but has its roots in a 1949 manga of the same name, which has little-to-no connection with Fritz Lang’s story. There’s still a bustling metropolis, parallels to the Tower of Babel, a mad scientist, societal turmoil, and a robotic girl, but despite some set design toward the end that pays homage to the original film, the story is its own. Other similarities are owed to the film’s production team. Many of the cartoonish character designs with big eyes and bigger noses seem as if they had been plucked from Astro Boy, due to the involvement of Tezuka Productions, which was founded by Astro Boy’s creator. In addition, the script was written by Katsuhiro Otomo, which explains traces of his cult favorite Akira, such as the distinct character motivations, political uprising amid catastrophic danger, and runaway power resulting in eye-popping destruction.

The Metropolis anime still has the social tension between classes, but this becomes secondary to the tension between humans and machines. It is robots who are relegated to the lowest levels of Metropolis, and distrust of machines runs rampant. Instead of a robotic harlot to sow dissent, the central android is a young girl named Tima, commissioned by a power-hungry duke but found first by a detective’s nephew who believes her to be human. The duke’s adopted son vows to hunt her down even as she questions her own identity.

This version of Metropolis is unlikely to leave anyone bored, and the animation is as polished and spectacular as any anime I’ve seen, albeit with a more sci-fi sheen than the films of Studio Ghibli. As a fan of futuristic cityscapes, Roger Ebert even called it “one of the best animated films [he’d] ever seen.” Like the original Metropolis, much of its power lies in the visuals: enormous fish swimming through the transparent wall of a high-rise office, a threatening stand-off as snow begins to fall, and especially the explosive climax set to a bizarrely fitting Ray Charles song.

Like Akira, Metropolis was meant to be a game-changer for anime, and the skill on display does not disappoint. What it lacks is a bit more focus on characters. The villain’s machinations are left rather vague, while the key relationship between the boy and the robot girl could have used more depth. I liked how their bond was tested, but by the end, the closing scenes don’t seem quite as optimistic as they try to be. These complaints are still quibbles, since the characters are still more engaging than in Akira.

It’s no surprise that a film with so much more action, color, and sound is far more entertaining than a silent picture from 1927. Lang’s Metropolis was the forerunner, the seed of so many other futuristic films since, while the animated Metropolis is like the vibrant blooming of its influence on animation worldwide. Both are must-sees for fans of science fiction cinema.

Best line from the 1927 Metropolis: (the closing title card, echoing Maria) “The mediator between head and hands must be the heart!”

Best line from the 2001 Metropolis: (Atlas) “It’s our emotions. They vibrate, and all we can do is move forward within that amplitude. But without affirming them, we can’t survive.”