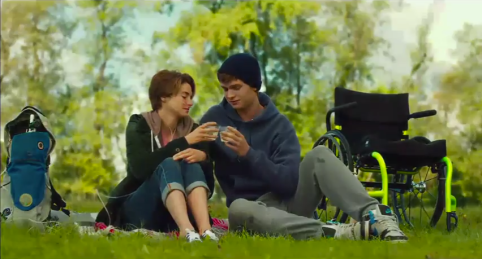 They say that pain demands to be felt,
And we’re the ones to feel it,
The ones to bear the cards we’re dealt,
Unable to conceal it.

But pain is not the only one
Demanding our attention,
Although it blinds us like the sun
From others’ intervention.

Rating: PG-13 (for language, sexuality, and some heavy themes)

The first time I heard about The Fault in Our Stars was when a female coworker of mine gushed over how much she loved it and how much she cried and how much she loved crying at it. Thus, I thought it was merely some weepy chick flick. Then I heard all kinds of buzz about the movie adaptation and its talented young stars. Then my VC read the book and was wholly unimpressed, finding the character of Hazel Grace Lancaster so ill-tempered and somber as to be irritating.

Thus, I didn’t know what my opinion would be once I finally saw the blockbuster tearjerker of 2014, and I must say that it deserved its praise. Shailene Woodley is indeed melancholy as Hazel Grace, but with good reason: riddled with cancer since the age of thirteen, she has few joys in life. All the normal teenage pleasures of friends and such have yielded to chemotherapy sessions and constant fears about those who fear for her. Her morbidity is understandable and, as my VC pointed out, off-putting, but that only makes the subsequent romance more surprising and heart-winning.

As Augustus Waters, Ansel Elgort is the nicest guy imaginable, able to keep his spirits high with life-affirming metaphors and willing to part with everything from trophies to wishes for the sake of his friends. Like me and Pat from Silver Linings Playbook, he can’t abide unsatisfying endings, and he won’t accept that life is meaningless. He’s “kind of awesome” and almost too good to be true, but therein lies his appeal. My VC and I both love Elizabethtown, and I pointed out to her that Orlando Bloom’s character in that film also starts out depressed and obsessed with death (with only good looks being a reason for anyone to be attracted to him), yet he is captivated and encouraged by Kirsten Dunst’s Claire, who seems to consider his happiness her mission. Augustus is the same way. When Hazel desires further information about her favorite book (which happens to be about cancer), his efforts on her behalf are more than enough to win her heart.

Based on what I’ve written so far, this may seem like a happy, uplifting story that starts low but keeps on getting better, “a rollercoaster that only goes up,” but such is not the case. Like life itself, there are ups and downs and a tear for every smile. The film is sometimes shockingly abrupt in ungilding the lily, but even then it achieves a touching balance of bitterness and humor, of cynicism and sentiment.

That’s not to say that it is without fault. I didn’t care for how the lone Christian character is mocked as a sincere but inept “Kumbaya” advocate. It’s easy for cynicism to slough off the assurances of religion, but I for one can’t imagine finding meaning in suffering without faith (Christianity, in my case). As convinced as Hazel is from the start, I don’t believe in oblivion, and it’s a bit sad that even the most buoyant character can only say he believes in a heavenly “something.”

Even so, The Fault in Our Stars treads the line between the two viewpoints, Hazel’s sarcastic pessimism and Gus’s vague optimism, and retains a unique intelligence within its familiar romantic storyline, acknowledging that one deep love can be life-affirming. While it’s essentially this generation’s Love Story, The Fault in Our Stars engages both mind and heart far better than the usual tearjerker, though it can still jerk the tears with the best of them.

Best line: (Augustus, to the mother of his friend’s ex-girlfriend) “Hello, ma’am. Your daughter, she’s done a great injustice, so we’ve come here seeking revenge. You see, we may not look like much, but between the three of us, we have five legs, four eyes, and two and a half pairs of working lungs, but we also have two dozen eggs, so if I were you, I would go back inside.”