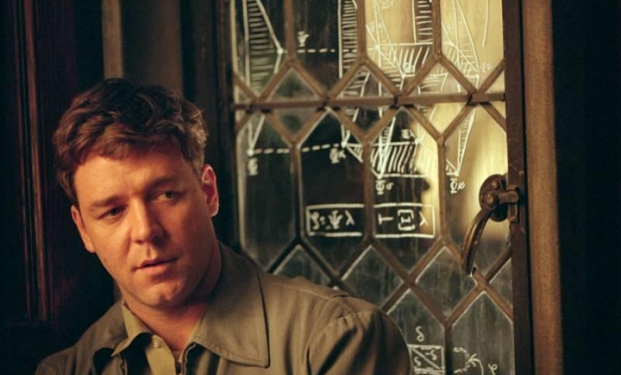 Brilliance lies within John Nash,
Whose confidence avoids a crash
With economic innovation,
Just the thing to make a splash.
As he savors acclimation,
Mathematics his vocation,
Two new ventures enter in,
Demanding love and dedication.
Undercover jobs begin;
A woman’s heart he learns to win,
But when the two get too entwined,
His sanity is spread too thin.
Some parts of life, he’s shocked to find,
Are only in his gifted mind.
Within his mind, the struggles start
Before he’s forced to be confined.
Discernment’s more than being smart,
And though the phantoms won’t depart,
The measure of a brilliant man
Lies in the constant of the heart.
_______________

I meant to review A Beautiful Mind some time ago, but like many things, it got away from me. Now, though, seems like a suitable time, in light of the recent deaths of John Nash and his wife Alicia, who were killed in a taxi accident on May 23rd, the latest victims of not wearing life-saving seat belts.

The film itself is a fitting tribute to his life and achievements, as well as an absorbing glimpse into the uncertainties of mental illness. It won both Best Picture and Best Director for Ron Howard and ranks among his best films. Russell Crowe brings Nash to life, and while he at first may seem like a collection of tics and eccentricities, his conversations with his college buddies display both his insecurities and his intellectual prowess.

While the film starts off as a character study of collegiate genius, confidence, and social awkwardness, Nash is soon drawn into government conspiracies and incessant paranoia. Then the film suddenly takes a Shyamalan-style turn back to reality that is jarring for both Nash and the audience, not to mention his supportive wife Alicia (an Oscar-winning Jennifer Connolly). The twist also makes it somewhat of a puzzle film deserving of repeat viewing. The rest of the film is spent with Nash attempting to maintain his sanity, a hard-fought daily struggle that affirms the touching devotion of his wife and friends and, for all his flaws, cements him as an admirable figure.

The film’s greatest strength is its acting. Crowe is really at his best here, and I will forever hold that he should have won for this instead of the previous year’s Gladiator; that way, Tom Hanks could have won for Cast Away. Oh, well. Jennifer Connolly is also heart-tuggingly persuasive in the way she endures and overlooks Nash’s problem areas to see the man worth loving underneath. Excellent smaller roles are filled by Ed Harris, Christopher Plummer, and the Vision—I mean, Dustfinger—I mean, Paul Bettany.

The film has long been criticized for the liberties taken with Nash’s life, such as the fact that his mental issues were apparently heard rather than seen. Plus, many important details were left out, such as the out-of-wedlock child he rejected and his divorce from Alicia in 1963. Nevertheless, the film’s power doesn’t lie in its adherence to the true history but in the character of Nash himself and his relationships, which I believe are visualized quite successfully. Nash’s surface unlikability is certainly made clear in various ways, but as the character says himself, he is “an acquired taste.” Nash and his wife did reconcile and remarried in 2001 (the year the film was released), so the film’s smoothing out of their romance is simply for the sake of story simplicity. Also, scenes that never happened, like the pens ceremony and Nash’s speech at winning the Nobel Prize (evidently, economics winners don’t give acceptance speeches), serve to heighten the emotion of his accomplishments and aren’t glaring in their embellishment, at least not for the casual moviegoer.

A Beautiful Mind may have its moments of disorientation, but it’s an Oscar winner with dramatic potency to spare, an artistically effective look at mental illness and faithful love, aided by a moving, if repetitive, James Horner score. (The score is incorporated into the Hall of Fame-worthy song during the end credits, “All Love Can Be.”) The final scenes are even more poignant now that John Nash’s life and career have ended, and his final line to his wife (“Come with me, young lady. I have a car outside. Interested in a ride?”) is almost prophetic, considering how they both died. Despite all the problems in his life, the film serves as a moving tribute to a mad genius.

Best line (not the most emotional but my favorite): (Charles, interrupting John’s mental groove) “When did you last eat? You know, food.”
(John Nash) “You have no respect for cognitive reverie, you know that?”
(Charles) “Yes. But pizza—now, pizza I have enormous respect for. And, of course, beer.”
Rank: List-Worthy